Wisconsin’s public officials are devoting concerted attention to water issues in 2019. Between the governor’s declaration of a year of clean drinking water and the Assembly Speaker’s Task Force on Water Quality, attention is being paid to water. It’s welcomed by the University of Wisconsin Water Resources Institute (WRI), which since 1964, has worked to address present and emerging water quality, quantity and management challenges. In 2019-20, WRI will fund three new research projects and three continuing ones.

The research is centered on groundwater and projects have been selected from proposals submitted in response to a joint solicitation for Wisconsin Groundwater Research and Monitoring projects from the Groundwater Coordinating Council. That group was established as part of Wisconsin’s Groundwater Protection Act and is made up of representatives of state agencies with groundwater protection responsibilities, along with a governor’s representative. The agencies involved include the Wisconsin departments of natural resources, agriculture, safety, health services and transportation, plus the Geological and Natural History Survey and University of Wisconsin System.

The currently funded projects, as of July 1, involve scientists at University of Wisconsin campuses in Eau Claire, Madison and Milwaukee, as well as Beloit College.

Civil and Environmental Engineering Professor Steve Loheide at the University of Wisconsin-Madison said, “Wisconsin is a water rich state, but its climate, the way we use the land and the ways in which we interact with water and ecosystems is constantly changing. Continued research on Wisconsin’s water resources is required to help inform decision making that will lead us and future generations down sustainable paths that support our cities, our agricultural systems, our environment and our economy – all of which are very much dependent upon water.”

His project, titled “Impact of Changing Snow Cover and Frozen Ground Regimes on Groundwater Recharge,” will help decision makers understand the quantity and flow of groundwater in the future. Loheide’s research team will determine the extent to which changes in the freeze-thaw cycle might affect the rate at which groundwater is replenished from surface water moving down from above. They will analyze existing conditions in groundwater, climate and soil temperature that encourage or inhibit this replenishment. That data will be used to develop models of snow accumulation and diminishment, variably saturated ground flow and heat transport. 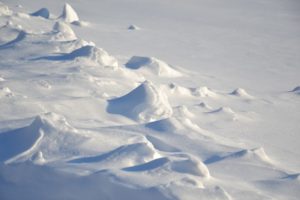 The remaining projects are:

“Assessment of the Source and Mobility of Phosphorus in the Hydrologic System in Western Wisconsin.” In a project new for 2019, investigators at the University of Wisconsin-Eau Claire will collaborate with a scientist with the U.S. Geological Survey to better understand from where phosphorus is entering lakes in western Wisconsin and how it is moving through water bodies. This will contribute to effective non-point source contaminant cleanup, lake management and land-use regulation. Water samples will be collected from private and municipal wells, and sediment and water will be tested from Mud Lake in Barron County.

“Microbially-Mediated Oxidation of Trace Element-Bearing Sulfide Minerals in Sandstones of Trempealeau County, WI.” In a project new for 2019, three researchers based at UW-Madison will also draw on the contributions from a researcher at Beloit College to gauge any possible effects on drinking water quality due to both natural and frac sand mining. Microbial-laden groundwater flowing through mined areas could expose oxygen to minerals that then generate acidity and lead to the release of toxic trace elements. The team will approach this exploration by charting the rate of reaction to oxygen in both the presence and absence of natural groundwater microorganisms.

“The Impact of Dissolved Organic Matter Composition on the Formation of Disinfection Byproducts in Groundwater.” In a continuing project, another UW-Madison researcher will analyze how tiny natural particles (dissolved organic matter) found in drinking water react when disinfectants (like chlorine) are added during treatment. Such reactions can pose a human health risk because they form harmful byproducts. Also, little is known about the type of dissolved organic matter (DOM) in groundwater, despite groundwater’s importance as a major source of drinking water in Wisconsin. Water samples from 20 drinking water utilities in the state will be collected and analyzed for DOM before and after treatment with chlorine. Closing this knowledge gap could lead to safer drinking water treatment practices by water managers.

“Improving Water and Nitrogen Use Efficiency Under Changing Weather Variability in the Central Sands.” In a continuing project, two investigators from the UW-Madison campus will spend time in the Wisconsin Central Sands area collecting data about nitrogen fertilizer use and irrigation management with future weather patterns in mind. The goal is to optimize economic returns for potato and vegetable farmers and increase irrigation water use efficiency in the area, while reducing the amount of nitrogen lost to the groundwater system.

“Dynamics of Arsenic Concentration and Speciation in Wisconsin Private Drinking Water Wells.” In a continuing project, two UW-Milwaukee scientists are looking at arsenic concentrations in private well water in Outagamie, Winnebago and Ozaukee counties. Arsenic is a naturally occurring element that can cause health problems when it appears in drinking water. The standard well-testing practice is to flush wells for more than an hour before sampling, which can lead to an underestimate of the actual level and types of arsenic in the water. This project will compare samples taken with and without flushing. The samples taken without flushing could lead to a better understanding of arsenic concentrations in Wisconsin’s private drinking water wells so that long-term exposure health risks can be more accurately assessed, and more effective water treatment techniques can be developed.