There’s an old adage about the risks of building a castle upon sand. In contrast, Steve Loheide is building a hypothesis on sand.

He theorizes that under a warming climate, Wisconsin’s soil, whether sandy, silty or clay-like, is actually going to be colder due to less snow cover. Such a warming world with its paradoxically chillier soil will have a cascading effect on groundwater levels. How and why will become clearer once the civil engineering professor completes work on a two-year project funded by the University of Wisconsin Water Resources Institute.

Loheide will be looking at soil types as well as the interplay of snow accumulation, snow loss, variations in the flow and amount of groundwater, and variations in heat transport to develop a regional model for the rate of groundwater replenishment, known as recharge.

Groundwater supplies 70% of the people who live in Wisconsin with their water for drinking, cooking and bathing. 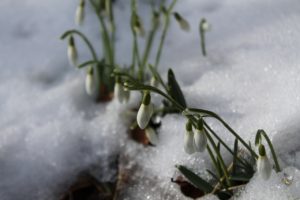 “The No. 1 driver in how much recharge you get in the spring is how much precipitation you have,” Loheide, of the University of Wisconsin-Madison, said. “Spring is always a hydrologically exciting time in Wisconsin. The snow is melting, evapotranspiration (moisture being taken up by plants and trees) is low and the soils are wet.” He said spring rains and snowmelt choose one of two paths: surface runoff or infiltrating the soil, where it might eventually recharge groundwater.

He continued, “soil texture plays a big role” in determining which path will prevail. “Sandy soils are very rarely saturated. Even if they freeze, they’re likely to freeze with pores that are going to remain open. Whereas, if you have a silty clay soil that freezes under nearly saturated conditions then that may act almost like an impermeable surface.”

Loheide noted that because soil types vary—for example, loamy soil in Wisconsin’s western and southwestern Driftless Area and sandy soil in the central part of the state—there will be non-uniform conditions around the state.

He went on to explain why now is optimum for undertaking this research. “We’re at a point in time where we’re really starting to see these changes in snow cover in the state. I think they’re observable and real so I don’t think we are talking about changes that we might expect in 50, 70, 100 years.”

He mentioned Wisconsin snowmobile clubs could attest to the changes in snow cover, and he relies on his own observations. “I can remember 30 years ago and it would seem like winter would come maybe in the late fall, November, December. You’d get a snowpack and it would pretty much stick around through the end of spring. In recent years, that’s not what we’ve been seeing.”

Now, he said, “We may have several intermittent melts across the winter. Well, that snow cover is really what’s key. The snow cover acts as insulating blanket…that buffers the soil from the extreme cold during January and February.”

It’s not just governmental agencies providing data. One person who’s contributing is University of Wisconsin-Milwaukee Geoscientist Tim Grundl, who previously undertook what he termed “a classic academic thing” of tracking noble gases in groundwater. In order to do that, for several years, he tracked snow cover data and ground temperature information at Cedarburg Bog in Ozaukee County.

“I looked at it for a few years while my noble gas project went on and I’ve just been storing it,” Grundl said. “So, I’m really glad that Steve is taking this on” and putting the data gathered for another purpose to a new use.

Once the analysis is complete the project, titled “Impact of Changing Snow Cover and Frozen Ground Regimes on Groundwater Recharge,” moves into a predictive phase.

“We fully expect that there are going to be parts of the observational record that aren’t able to tell us the complete story. So, modeling will allow us to use a suite of scenarios to consider every soil texture that we’re interested in and then make fair comparisons between different climate realizations.” Loheide continued, “We can run (through a model) the exact same climate on five different soil types, which empirically you can’t get from observations.”

The upshot is a peek into the possible future. “Is central Wisconsin going to be more like Illinois in the future? Probably. We might be able to decipher and anticipate some of the future trends,” he said.

This, then, provides a means to gauge just how much groundwater is going to be available for all those Wisconsin homes that are castles, located on sandy ground, or not.