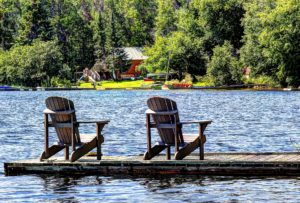 For many Wisconsin families, a lake home or cabin is a little piece of heaven. A corporeal necessity of that heaven is often a septic system.

A team of researchers at the University of Wisconsin-Stevens Point Center for Watershed Science and Education, and with funding from the Water Resources Institute, is exploring whether there is a connection between a septic system and a lake’s water quality.

“Water quality in a lake is controlled by a lot of things, but one of the most important is the levels of, or the concentrations of, nutrients, particularly nitrogen and phosphorus,” said Paul McGinley, director and research scientist with the center. He holds another appointment with the University of Wisconsin-Madison Extension. “Anything that contributes to an increase in the amount of nitrogen or the amount of phosphorus that goes into the lake is going to certainly influence the biological productivity in that lake and ultimately that leads to water quality challenges,” such as algae growth.

The “anything” he referenced could be phosphorus and nitrogen in water from septic systems moving through systems’ drainfield soils into groundwater. That groundwater ultimately feeds streams and lakes. Previous studies have shown that wastewater treated in a tank to digest solids then passed to a drainfield for further chemical and biological reactions in the soil can still have nitrogen and phosphorus concentrations that are more than 50 times their concentrations in Wisconsin lakes.

McGinley said, “There really are a lot of unknowns with respect to how much phosphorous in particular gets into the lake from septic systems. We thought we could pair our interest in groundwater and lakes with this question and the need really to know what’s going on with this interaction between septic systems and some analytical methods that we’ve been developing in our laboratory.”

Current progress in developing those methods rests in the hands of Amy Nitka, organic laboratory supervisor with the center. She said, “The presence of artificial sweeteners allows us to distinguish contamination from human wastewater from other sources.”

Although it is challenging to identify these molecules, Nitka and her students have been working to refine analytical methods for acesulfame and sucralose, two common artificial sweeteners. With these identifying markers, they are able to determine which lake water samples have likely been impacted by wastewater from septic systems.

As Nitka presides over the lab, its students and equipment array await the fruits of field collection. Using a small tube inserted into the lakebed as well as nearshore, McGinley’s team is collecting water samples from several central Wisconsin lakes. These lakes are characterized by relatively calcareous glacial drift soils, areas where groundwater is moving into the lake and sandy lakebeds.

Just as the artificial sweetener signature is vital to this project, it’s also been vital to the students’ experience. They have presented research results at local and national conferences and some have gone on to graduate studies.

“It’s been a great project for our students,” McGinley said. “We have students that get involved in the analytical work and in the field work. Because this is kind of tricky analytical work, it’s really been a great launching place for these undergraduates.” It’s a two-way street, he was quick to add, saying the students’ contributions have also been vital to the lab’s progress.

That progress will also result in a model to predict how septic systems influence phosphorus load to a lake over time, McGinley said. “One of our outcomes is to have a better understanding of how those septic systems might be influencing the lake. Then you can decide is that (septic systems) really something that’s worthwhile focusing on or should we be working on some other problems. We need to at least quantify that before we can put into the assessment of what we should be developing for strategies.”

A final angle to this project is its real-world applicability. McGinley said he and others on the research team will deliver presentations at conferences and will assist consultants in creating lake nutrient budgets.

He said he is also especially interested in sharing this knowledge with lake associations and lakeshore property owners. “The connection between a septic system and the lake is through groundwater. Groundwater is the water from rain and melting snow that moves downward through soil and eventually moves into lakes and streams,” he noted.

Cabin dwellers are familiar with how some areas of the lakebed are cooler than others during the summer. These “springs” are areas of high groundwater inflow. Temperature measurements can be used to map the areas of highest inflow areas. As part of the lab’s outreach and teaching, volunteer central Wisconsin cabin owners have been collecting temperature measurements with relatively simple probes fabricated as part of the project.

McGinley said the effort, “Helps us all understand how much the lake and the land are connected,” and how the boundaries of these small heavens actually extend well beyond the shore.